Swami Vivekananda (12 January 1863 – 4 July 1902) was a Hindu monk who attained the highest level of spiritual realization and was the chief disciple of 19th-century Saint Sri Ramakrishna Paramhamsa. He was a key figure in the introduction of the Indian philosophies of Vedanta and Yoga to the Western world. He was the major force behind raising interfaith awareness in the West, reviving Hinduism in India and elevating it to the status of a major world religion. He was the first person to introduce the concept of nationalism to colonial India. He then became the driving force within the freedom movement and was regarded as a hero to every freedom fighter. Swami Vivekananda is perhaps best known for his speech which began with,”Sisters and brothers of America …” in which he introduced Hinduism at the Parliament of the World’s Religions in Chicago in 1893. However his real contribution to humanity was one of inspiration.

His teachings influenced philosophers including: Sri Aurobindo, Rabindranath Tagore, Romain Rolland, and Max Muller. He teachings inspired and helped to create world leaders and social reformers including Mahatma Gandhi and Anni Besant. Scientists, Nikola Tesla, Helmholtz, Lord Kelvin and Jagdish Chandra Bose also found inspiration is the message of Swami Vivekananda.(Scientists). These are but a few of the gems Swami Vivekananda has helped to bestowed upon the world. He was also the first person to impart the simple yet profound concept of “Head, Heart, Hand” and “Serve, Love, Give”, two models for affecting transformation. Powerful yet simple models describing how one can transform thought, word and deed. These models still in use today, are used by a wide variety of people including; psychologists, spiritual leaders and those seeking to inspire, understand and affect personal transformation in themselves and others. 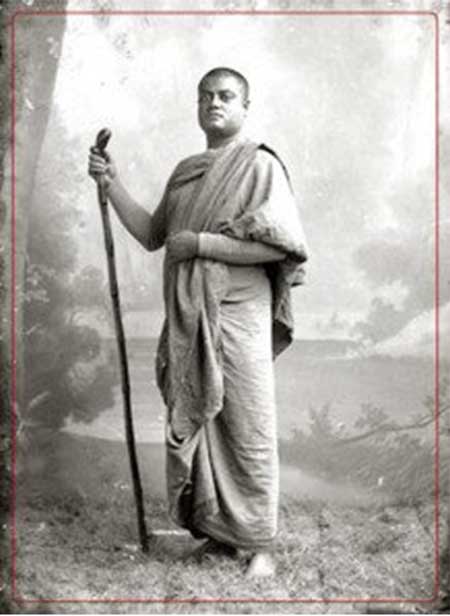 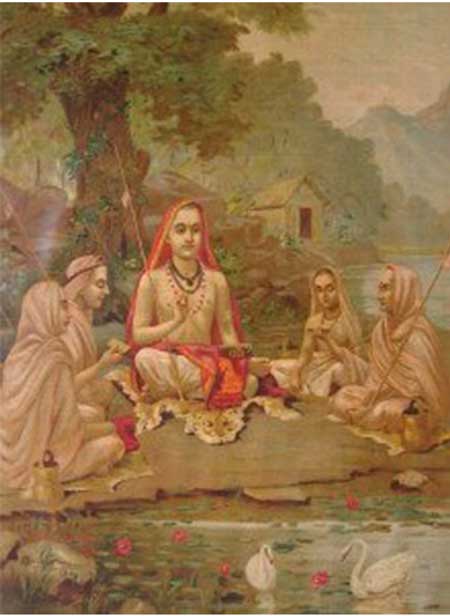 Born in the 8th Century AD, Adi Shankaracharya is recognized as the undisputed spiritual leader of India. Shankaracharya propagated the Advaita Vedanta philosophy which leads to the experience of creation, liberation and god as ‘one'. He also established the Dashnami Sannyasa tradition to unify the various groups of Sannyasins, scattered throughout the country under the banner of Sanatana Dharma. Dashnami Sannyasins continue to convey his eternal message of the synthesis of all beliefs culminating in Advaita, and the monastic vision of reality in which all things are understood as ultimately leading to lightness of heart;the sign of enlightenment.

Sri Swami Sivananda Saraswati was born in Pattamadai, in Tamil Nadu in 1887. After serving as a medical doctor in Malaya, he renounced his practice to search for a Guru in the foothills of the Himalayas. He settled in the sacred valley of Rishikesh and was initiated into the Dashnami Sannyasa tradition in 1924 by Swami Vishwananda Saraswati of Shringeri Mutt. In the years following, Swami Sivananda wrote over two hundred books and articles on yoga and spirituality. The purpose of which was to introduce and reinforce yogic values in the minds of the general public. His emphasis on breaking down the barriers which separated those in need from the teachings that could help them, whether it was yoga for health, peace of mind or spiritual aspiration.

This ideology continues today to guide the work of the Satyananda branch of his lineage. To this end Sri Swami Sivananda Saraswati toured India extensively, inspiring people to practice yoga and to lead a divine life. He founded the Divine Life Society in Rishikesh in 1936, the Sivananda Ayurvedic Pharmacy in 1945, the Yoga Vedanta Forest Academy in 1948 and the Sivananda Eye Hospital in 1957. He attained Mahasamadhi on the 14th of July 1963. As a major spiritual voice of modern times, Sri Swami Sivananda Saraswati guided thousands of spiritual seekers, disciples and aspirants all over the world. 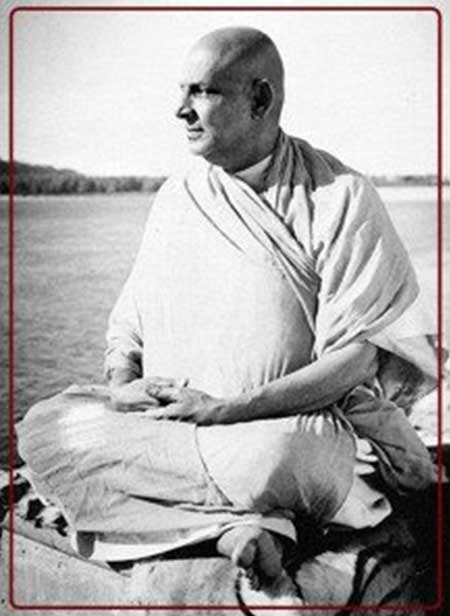 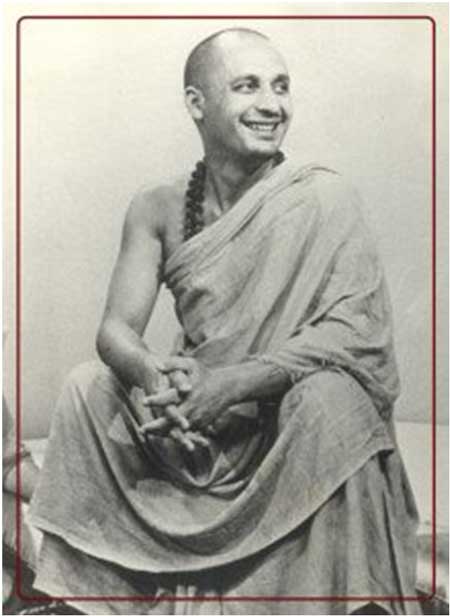 Swami Satyananda Saraswati (1923-2009) was born in Almora in Northern India. In 1943, he traveled to Rishikesh, where he met Swami Sivananda and took initiation into the Dashnami Sannyasa tradition. For the next twelve years he immersed himself fully in ashram life, working and training under Swami Sivananda. In 1955, he departed from the ashram to wander throughout India as a Parivrajaka (wandering mendicant) in search of his life’s mission. Inspired by Swami Sivananda’s integral approach to yoga, he founded the International Yoga Fellowship Movement (1956) and Bihar School of Yoga in1963. These two institutions formed a firm base for the dissemination of yoga. In later years, he also founded the Yoga Research Foundation (1984) and the charitable institution, Sivananda Math (1984) in memory of his guru.

From the 1960s to the 1980s, Swami Satyananda continued to develop his unique system of yoga, which became famous as Satyananda Yoga or Bihar Yoga. Swami Satyananda traveled the world to spread his teachings. At the same time he conducted medical and scientific research into the benefits and various applications of yoga. This results of this research formed the basis for over eighty books on yoga, tantra and spirituality. As a result, yoga has gained universal acceptance as a way of life with the potential to uplift humanity by addressing the needs of a wide cross-section of society. In 1988, Swami Satyananda retired from public life to adopt the life of a Paramhamsa, (the highest stage of spiritual dedication). In this stage Sannyasins remain immersed in the universal consciousness. He then moved on to Rikhia inJharkhand, India, an underprivileged rural area, where he lived in seclusion and performed many higher sadhanas. As result of his sadhana, he began a new phase of service to humanity – to actively uplift the local rural community. He achieved this aim through the expansion of Sivananda Math with the ongoing support of his many dedicated followers and disciples. He also conducted the Rajasooya Yajna (which was held for twelve consecutive years) for the peace, welfare and prosperity of all. On 5th December 2009, Swami Satyananda entered the exalted state of Mahasamadhi. He consciously departed from the physical body at the time of his choosing. Thousands of followers and well-wishers traveled to Rikhiapeeth during the following weeks to pay homage to this great spiritual master. His teachings and example continue to inspire and encourage people from all around the world to live a yogic life.

Swami Niranjanananda Saraswati was born in Rajnandgaon in Chhattisgarh in 1960. Guided by his guru, Swami Satyananda Saraswati from birth, Niranjanananda came to live with him at the Bihar School of Yoga in Munger at the age of four years. There he received training in yogic and spiritual sciences and in the state of yoga nidra. In 1971 he was initiated into Dashnami Sannyasa Tradition, and thereafter for eleven years he lived overseas, mastering skills in various areas, acquiring an understanding of different cultures and helping to establish Satyananda Yoga ashrams and centers in Europe, Australia, North and South America. At the behest of his Guru, Niranjanananda returned to India in 1983 to guide the activities of the Bihar School of Yoga, Sivananda Math and the Yoga Research Foundation at Ganga Darshan.

In 1990 he was initiated as a Paramhamsa Sannyasin and in 1995 anointed spiritual preceptor in succession to Swami Satyananda Saraswati. He established Bihar Yoga Bharati, the first university of yoga, in 1994 and the Yoga Publications Trust in 2000 in Munger. He also initiated a children’s yoga movement, Bal Yoga Mitra Mandal, in 1995. In addition to steering the activities at Munger, he traveled extensively to guide seekers around the world until 2009, when he received the command to embark on a new phase of Sannyasa life. Author of many classic books on yoga, tantra and the Upanishads, Swami Niranjananda is a charismatic source of wisdom on all aspects of yogic philosophy, practice and lifestyle. He ably combines tradition with modernity as he continues to nurture and spread his Guru’s mission from his base at Munger. 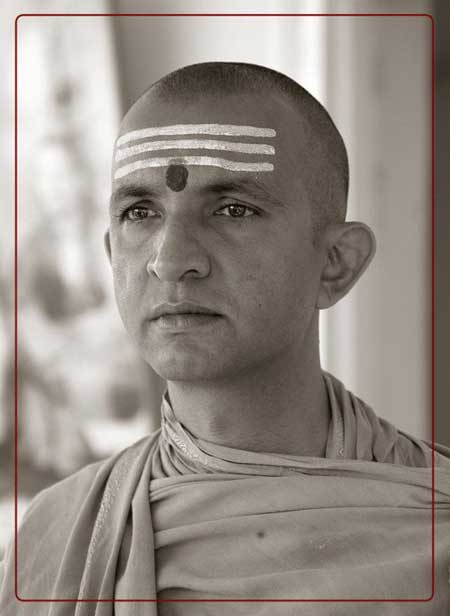